THE MEDAL OF HONOR

The Medal of Honor is the highest military award for bravery that can be given to any individual in the United States of America. Established by joint resolution of Congress, 12 July 1862 (amended by Act of 9 July 1918 and Act of 25 July 1963.) The first Medals of Honor awarded went to six Union Army volunteers, members of Andrews’ (or Mitchel’s) Raiders. These men attempted to disrupt the Confederate rail lines between Atlanta and Chattanooga. Disguised as civilians, the 19 soldiers, along with civilians James Andrews and William Campbell, captured the locomotive General at Big Shanty, Georgia. Chased by the persistent conductor of the General the raiders charged north, attempting to burn bridges and destroy track along the way. Less than 20 miles south of Chattanooga the "Great Locomotive Chase" ended. All of the raiders were captured and eight were tried and executed.

On March 25, 1863, six of the raiders arrived in Washington after parole from a Confederate prison, and these six were the first to be presented Medals of Honor by Secretary of War Stanton. Medals were later awarded to 13 other raider members, some posthumously. The posthumous recipients of the Medal from the "Great Locomotive Chase" are buried next to Ohio’s monument to its participants, a replica of the General, at the Chattanooga National Cemetery.

Since those first six Medals of Honor were awarded during the Civil War, only 3,408 individuals have received this most valued recognition, 18 of them twice. By World War II the stature of this Medal was so high that President Harry S. Truman, a World War I veteran who understood the horrors of battle, once told a gathering of WWII recipients, "I’d rather have this Medal than be President." General George S. Patton, another outstanding combat veteran who clearly understood the bravery required in combat, told one recipient as he placed the coveted Medal around the hero’s neck, "I’d give my immortal soul for that Medal."

In their provisions for judging whether a person is entitled to the Medal of Honor, each of the armed services has set up regulations which permit no margin of doubt or error. The deed of the person must be proved by incontestable evidence of at least two eyewitnesses; it must be so outstanding that it clearly distinguishes his gallantry beyond the call of duty from lesser forms of bravery; it must involve the risk of his life; and it must be the type of deed which, if he had not done it, would not subject him to any justified criticism.

Citation: For conspicuous gallantry and intrepidity in action at the risk of his life above and beyond the call of duty. Capt. (then 1st Lt.) Fritz, Armor, U.S. Army, distinguished himself while serving as a platoon leader with Troop A, near Quan Loi. Capt. Fritz was leading his 7-vehicle armored column along Highway 13 to meet and escort a truck convoy when the column suddenly came under intense crossfire from a reinforced enemy company deployed in ambush positions. In the initial attack, Capt. Fritz' vehicle was hit and he was seriously wounded. Realizing that his platoon was completely surrounded, vastly outnumbered, and in danger of being overrun, Capt. Fritz leaped to the top of his burning vehicle and directed the positioning of his remaining vehicles and men. With complete disregard for his wounds and safety, he ran from vehicle to vehicle in complete view of the enemy gunners in order to reposition his men, to improve the defenses, to assist the wounded, to distribute ammunition, to direct fire, and to provide encouragement to his men. When a strong enemy force assaulted the position and attempted to overrun the platoon, Capt. Fritz manned a machine gun and through his exemplary action inspired his men to deliver intense and deadly fire which broke the assault and routed the attackers. Moments later a second enemy force advanced to within 2 meters of the position and threatened to overwhelm the defenders. Capt. Fritz, armed only with a pistol and  bayonet, led a small group of his men in a fierce and daring charge which routed the attackers and inflicted heavy casualties. When a relief force arrived, Capt. Fritz saw that it was not deploying effectively against the enemy positions, and he moved through the heavy enemy fire to direct its deployment against the hostile positions. This deployment forced the enemy to abandon the ambush site and withdraw. Despite his wounds, Capt. Fritz returned to his position, assisted his men, and refused medical attention until all of his wounded comrades had been treated and evacuated. The extraordinary courage and selflessness displayed by Capt. Fritz, at the repeated risk of his own life above and beyond the call of duty, were in keeping with the highest traditions of the U.S. Army and reflect the greatest credit upon himself, his unit, and the Armed Forces.

Place and date: Near Loc Ninh, Republic of Vietnam, 6 January 1968.

For conspicuous gallantry and intrepidity in action at the risk of his life above and beyond the call of duty. Cpl. Wickam, distinguished himself while serving with Troop F. Troop F was conducting a reconnaissance in force mission southwest of Loc Ninh when the lead element of the friendly force was subjected to a heavy barrage of rocket, automatic weapons, and small arms fire from a well concealed enemy bunker complex. Disregarding the intense fire, Cpl. Wickam leaped from his armored vehicle and assaulted one of the enemy bunkers and threw a grenade into it, killing 2 enemy soldiers. He moved into the bunker, and with the aid of another soldier, began to remove the body of one Viet Cong when he detected the sound of an enemy grenade being charged. Cpl. Wickam warned his comrade and physically pushed him away from the grenade thus protecting him from the force of the blast. When a second Viet Cong bunker was discovered, he ran through a hail of enemy fire to deliver deadly fire into the bunker, killing one enemy soldier. He also captured 1 Viet Cong who later provided valuable information on enemy activity in the Loc Ninh area. After the patrol withdrew and an air strike was conducted, Cpl. Wickam led his men back to evaluate the success of the strike. They were immediately attacked again by enemy fire. Without hesitation, he charged the bunker from which the fire was being directed, enabling the remainder of his men to seek cover. He threw a grenade inside of the enemy's position killing 2 Viet Cong and destroying the bunker. Moments later he was mortally wounded by enemy fire. Cpl. Wickam's extraordinary heroism at the cost of his life were in keeping with the highest traditions of the military service and reflect great credit upon himself and the U.S. Army. 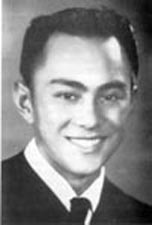 Place and date: Near Bien Hao, Republic of Vietnam, 1 January 1969.

SFC. Yano distinguished himself while serving with the Air Cavalry Troop. SFC. Yano was performing the duties of crew chief aboard the troop's command-and-control helicopter during action against enemy forces entrenched in dense jungle. From an exposed position in the face of intense small arms and antiaircraft fire he delivered suppressive fire upon the enemy forces and marked their positions with smoke and white phosphorous grenades, thus enabling his troop commander to direct accurate and effective artillery fire against the hostile emplacements. A grenade, exploding prematurely, covered him with burning phosphorous, and left him severely wounded. Flaming fragments within the helicopter caused supplies and ammunition to detonate. Dense white smoke filled the aircraft, obscuring the pilot's vision and causing him to lose control. Although having the use of only 1 arm and being partially blinded by the initial explosion, SFC. Yano completely disregarded his welfare and began hurling blazing ammunition from the helicopter. In so doing he inflicted additional wounds upon himself, yet he persisted until the danger was past. SFC. Yano's indomitable courage and profound concern for his comrades averted loss of life and additional injury to the rest of the crew. By his conspicuous gallantry at the cost of his life, in the highest traditions of the military service, SFC. Yano has reflected great credit on himself, his unit, and the U.S. Army.