During special ship evolutions a battle flag is flown from the mast of U.S. Navy Ships. The USS Ronald Reagan (CVN 76) battle flag continues this tradition with a design created exclusively by her plank owner crew to honor our namesake.

Like the ship's seal, each aspect of the battle flag has relevance to President Reagan.

President Reagan's personal military experience began in 1935 when he enlisted as a private in Troop B, 322nd Cavalry – the reason for the letter B and the numbers 322. In April of 1937 he earned a commission as a Second Lieutenant in the Reserve Corps of Cavalry. Later that year, Ronald Reagan starred in the motion picture, “Sergeant Murphy”, a Hollywood movie made in part by the 11th Cavalry Regiment. The red over white background is reminiscent of the 11th Cavalry’s original guidon (or flag) and later, their unit’s patch. The crossed sabers reflect those found on the cover or cap of a Cavalry officer as early as the 1800s.

During World War II, Lt. Reagan interrupted his acting career to join active-duty service. In 1942, he transferred to the Army Air Corps assigned to the 1st Motion Picture Unit in Culver City, Calif. In support of the war effort, Lt. Reagan’s military units produced 400 military training films, and he was promoted to Captain. On Apr. 1, 1953 his military career ended until Jan. 20, 1981 when he was sworn in as Commander in Chief of the U.S. Armed Forces.

The number 76 refers to the hull number of USS Ronald Reagan (CVN 76), a great warship named for a great President whose service as Commander in Chief provided the strength still needed for peace today.

Wes Slimmer of  1/How 67-68 found this in the Rocket Courier which might be out of Wyalusing, PA. 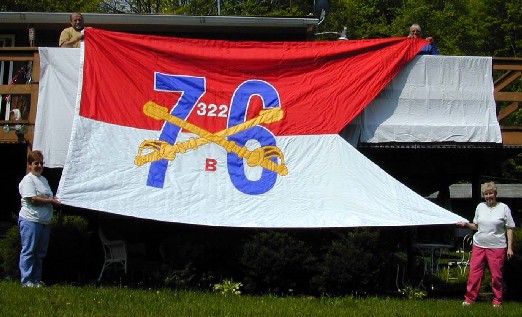